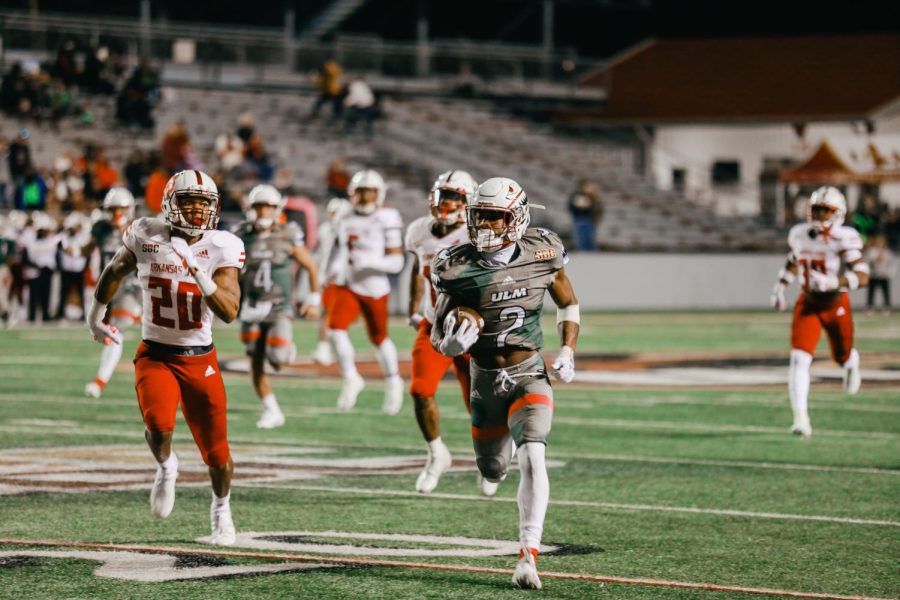 It’s safe to say after ULM’s 27-24 loss to Arkansas State at home that the push for a bowl game is over.

The Warhawks found themselves on the losing side of a game-sealing interception for once after returning quarterback Rhett Rodriguez’s pass was picked off with 20 seconds left.

This could have been a sounding sendoff for the Warhawks before they venture to Baton Rouge on Saturday to take on LSU. Instead, the Red Wolves pounced on the opportunity to win only their second game of the season and snap an eight-game losing streak.

But for Terry Bowden, it is just part of building a culture and rebuilding a program.

“Until you become a football team where you’re better than the other team most of the time, this is what you get when you’re building a program,” Bowden said. “You’re thankful that your players will give you four quarters and get you to the end of the game and try to find a way to win.”

The Warhawks offense looked shell-shocked in the opening and closing moments of the contest. Despite a scoring spurt of 21 unanswered points by ULM before and after halftime, Arkansas State found their way back into the contest.

The Red Wolves took the lead late in the final quarter with a field goal and their defense took care of the rest.

Don’t be fooled by the airplane-themed uniforms—it was the ground game that put ULM into the contest.

Running back Malik Jackson broke free for 53 yards on ULM’s final drive of the half to bring them into the red zone. Jackson capped off the drive with a three-yard score.

For anyone who missed his first big run, Jackson put on an encore with a 75-yard rushing touchdown on the first play of the second half. This put ULM up 14-10.

Jackson stabilized the offense after the pass game struggled in the first half. Rodriguez started in his return but threw an interception in the red zone. Chandler Rogers stepped in at quarterback, but his production was limited. Rogers also fumbled a snap but he was able to recover.

ULM’s defense stunned Arkansas Stateat the start. Interceptions by Keilos Swinney and Quae Drake gave the Warhawks the momentum they needed to spark a drive. However, neither Rogers nor Rodriguez could produce.

After a failed trick play and a sack set ULM back 13 yards, Rodriguez dropped back and connected with Boogie Knight in triple coverage to save the drive.

Rodriguez owned up to his mistakes in the contest, as he claimed the majority of the snaps.

Other players addressed their shortcomings as a team.

“It’s one where we have to go back to the drawing board and try to get better from it,” linebacker Zach Woodard said.