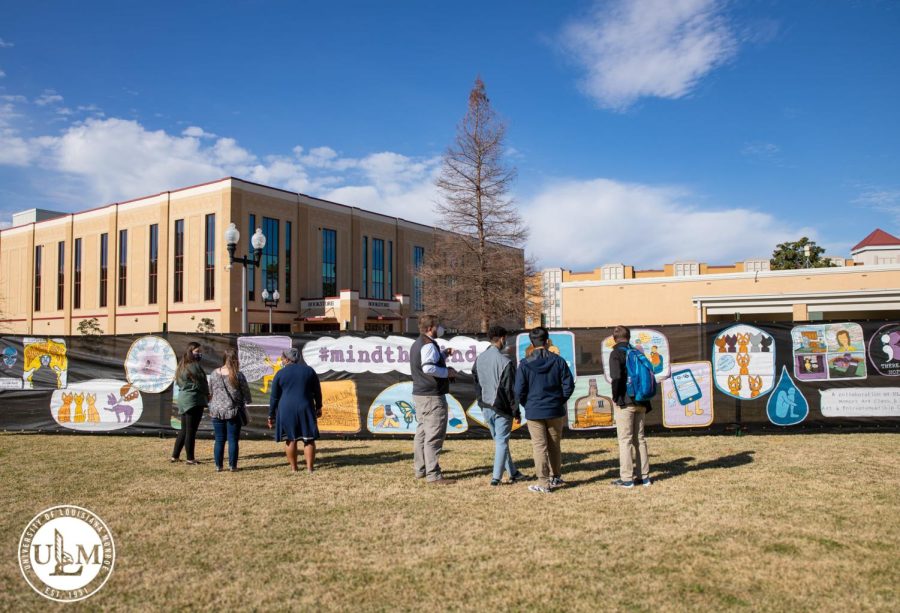 Chloe Dustin, a sophomore history major,  contributed to the banner by painting a section that depicts a girl sitting in a dark corner of the room with hands reaching for her.

“This is supposed to symbolize the dangers of self-isolation, and how people who love you are more than eager to help if you’ll let them,” Dustin said. She also said that the dark corner represents the problems that come with being alone with your thoughts as a mentally ill person.  Many people fall into isolation, and this draws attention to how it often causes more harm than good. Dustin hopes this project will help others realize that poor mental health is much more common than we realize, and it’s too normalized.

Freshman computer science student Amir Alnajjar worked on the planning, brainstorming and painting of the mural. Alnajjar’s section displayed four cats spending time together, but one is being held back by a leash that has the label “trauma.”

Alnajjar said, “The hope is that when people saw the artwork that they would reflect on their own mental health status.” Alnajjar was assigned a partner that helped make his vision come to life, but because they were in different classes, they never got to meet. Alnajjar’s partner took his idea and made it into something great.

Freshman risk management and insurance major Thanh Phan provided ideas about the project and the base image of the painting of the cats having a conversation. After other artists defined and sketched the picture, Phan helped with the coloring work as well. Phan explained that the image was about dealing with loneliness, which she has faced quite a lot since moving to the U.S., far from her home and family.

Phan said, “The mural was a way that I could use to express my feelings and enable other students to acknowledge the importance of mental health.”  The images were simple for everyone to understand, but impactful enough to make people realize potential problems and seek support.