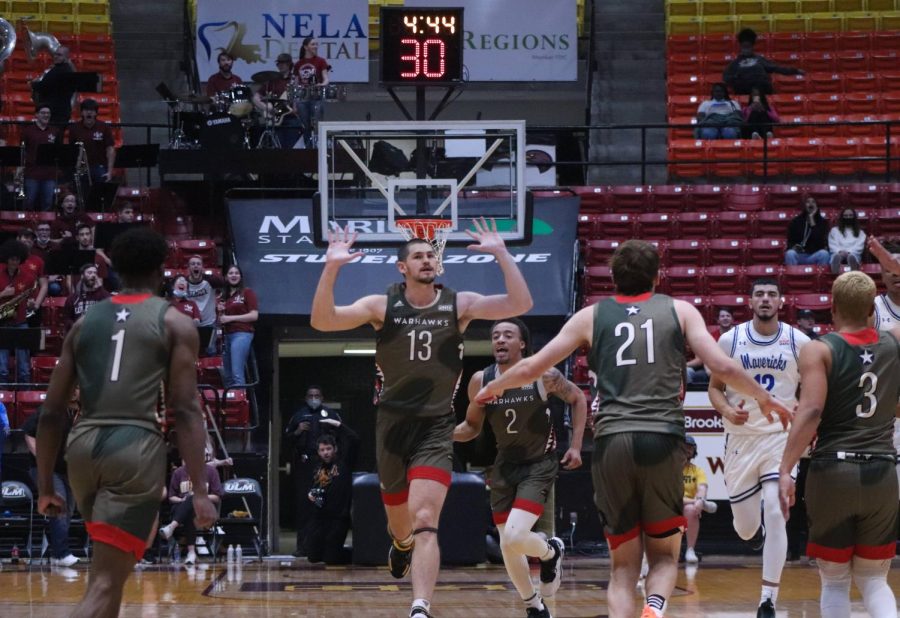 The Warhawks appear to be a team that lives and dies by the 3-point shot. Their 41% shooting from beyond the arc guided them to their final-ever win over UT Arlington as a Sun Belt Conference opponent and secured their third-straight win.

A missed shot from the Mavericks with six seconds remaining handed ULM a 74-71 win in Monroe.

But the Warhawks’ fortunes were reversed against Texas State last Saturday.

ULM was a chilly 22% on its 3-pointers against the Bobcats. Despite the rough offensive outing, there was still hope for the Warhawks as the game approached two minutes remaining. Thomas Howell snagged an offensive rebound off a missed 3-pointer by Elijah Gonzalez.

Trailing by five points, Howell looked to dish to a teammate ready to take a shot, but a Bobcat defender found the ball instead.

Texas State played through the 30-second shot clock and turned the match into a game of free throws and fouls.

The Bobcats left Fant-Ewing Coliseum with their fifth-straight win after besting the Warhawks 63-54.

Andre Jones was the one consistent factor through both games. The reigning Sun Belt Player of the Week scored a combined 43 points to lead the ULM offense.  Jones’ mentality was to make up for any mistakes he made and then repeat the effort.

“When I drive it, I try not to miss anything,” Jones said. “If I do miss, I try to make two more layups after I miss one to make up for that miss. It was just going for me today.”

Jones proved to be a man of his word. He finished the night shooting 10-of-15 against UTA.

ULM had a rough home stay before its match up with the Mavericks. This win brought confidence to head coach Keith Richard.

“At home, we finally held somebody off,” Richard said.

But Richard’s Warhawks were quickly taken out of their groove against Texas State. Texas State took full advantage of ULM’s missed shots and mistakes. The Bobcats scored 12 points off fast break opportunities.

ULM, meanwhile, hit just one free throw off a transition foul.  The bench also failed to produce in their limited minutes. Luke Phillips hit a 3-pointer in his only shot of the game, but nobody else found the bottom of the net coming off the bench.

This week ULM faces Louisiana-Lafayette. Neither team has swept the other in four seasons. ULM looks to defend the nest on Thursday and steal one in Cajun Country on Saturday.