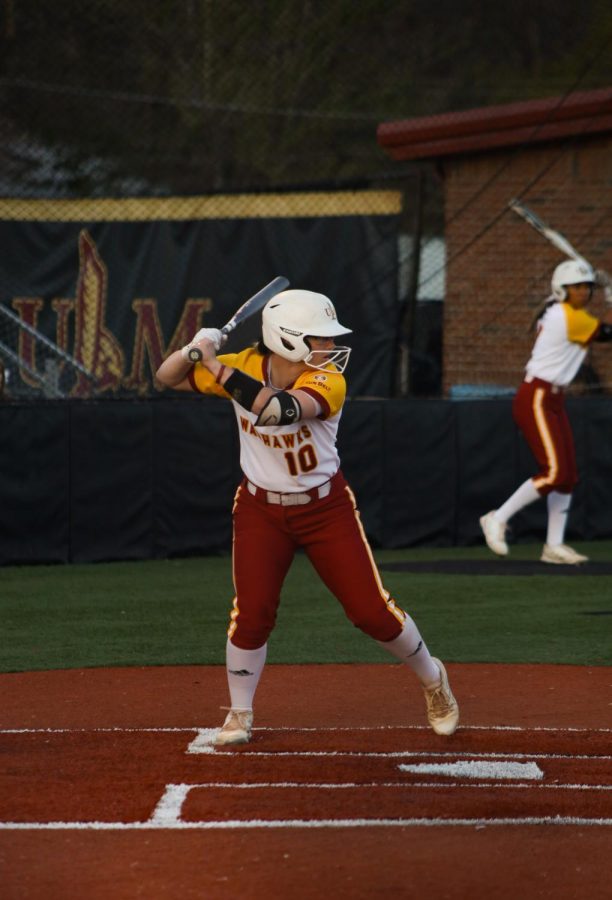 The Warhawks only pulled out one win in their three home games this week. After winning against Southeastern Louisiana 4-0 last Wednesday, ULM (17-10) started out the week strong. But after losing twice to App State (17-11), the Warhawks finished the week out with a lot to work on.

“A loss—L.O.S.S.—for us stands for ‘Learning Opportunity Stay Strong,’ and we have told our team before, ‘if you’re not learning, it is a loss,’ and we just have to get better each day,” Fichtner said. “The more we are put in these positions, the more experience we are going to get. That experience will be better for us in the long run.”

The Warhawks pulled their win against the Southeastern Lions off a stellar performance from freshman pitcher Kinsey Kackley. She allowed only two hits in a full seven innings of work and struck out five.

“I can’t say enough about the great job Kinsey did in the circle because any time you throw a seven-inning shutout to a team like that, that’s a big deal,” Fichtner said. “To be a freshman and go in there and allow only two hits, that’s elite status, that was awesome.”

Sophomores Andie Edwards and Lordes Bacon along with senior Kennedy Page were the leading offensive producers for ULM. Edwards hit her second home run of the season in the second inning to give the Hawks the lead 1-0. Bacon went 2-2 with a walk and Page went 2-3 at the plate.

Junior Kennedy Johnson and freshman Jacelyn Buck also had a combined three RBI in the game.

In the series opener against App State, ULM could not string together a timely hit leaving nine Hawks stranded on base throughout the game. Pitching also did not have a great performance as three home runs by the Mountaineers’ right fielder made the difference in the 6-3 loss.

Senior Adrianna Chavarria was given the loss after replacing relief pitcher freshman Victoria Abrams. Chavarria recorded nine strikeouts in 5.2 innings of relief. Through three pitchers, the Warhawks issued eight walks during the game.

The second game of the App State series saw ULM hitting the ball much better. But the Warhawks could not get enough runs across the plate to mount the rally of the Mountaineers.

ULM had the lead through the majority of the game after scoring five runs in the second after two hits and a pair of errors from the Mountaineers’ defense gave the Hawks the lead 6-1.

Page had three RBI in the game off her two-out double in the second.

Despite the offensive production from the Warhawks, a fifth inning grand slam from App State pushed them ahead to take the win 7-6.

“We just have to be more consistent,” Fichtner said. “On the positive side, we played errorless defense, but we gave up too many walks again today and then gave up a big hit. That big inning is what got us.”

ULM will be on the road against McNeese on Tuesday at 6 p.m. and will play an away series against UT Arlington starting Friday at 6 p.m.