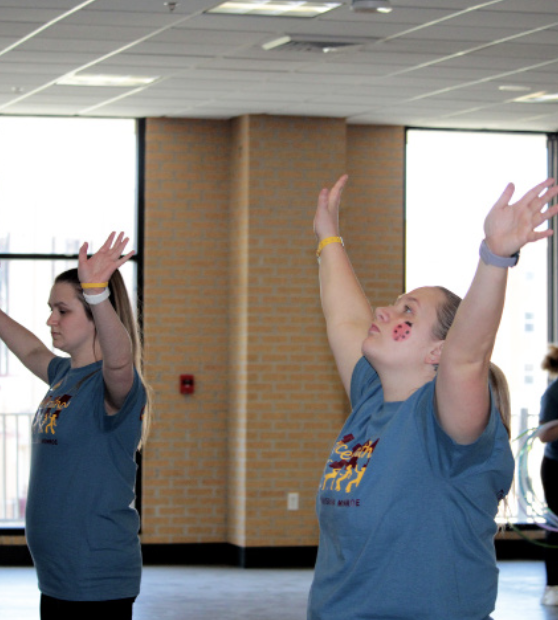 Network Hospital, according to the Children’s Miracle

Many children’s hospitals rely on donations, which go

toward paying for children’s medical bills that aren’t paid

In order for CMN hospitals to raise money, they rely on

According to Danielle Camacho, the internal vice president

of Dance Marathon, 18% of the money goes to helping

Students helped raise money in a variety of ways. Some

One way students were encouraged to donate was

through set goals each hour. These goals were determined

based on a child who received medical care at a CMN

According to Camacho, the three children they based the

goals on were Koen Smith, Gracie Beck and Zach Chamness.

Smith was a baby treated in the NICU at a CMN Hospital,

and every day there are 925 babies treated in a CMN

hospital. that’s why the options for donation amounts

on ECMO life support twice and against all odds survived

Chamness has been cancer free for seven years, so “our

goal was to raise $7 for each year he has been cancer free,”

Aixa Tharyani, the director of event operations, said having

teams of students participate at the event drastically

“We are a student-led organization so having participants

and teams from our college peers really helps drive

and keep us going as well as motivated,” Tharyani said.

Ryleigh Rowland, a senior finance student, was on a

team with her sorority Kappa Beta Gamma. Together, they

“I think it’s important to show support whether it be

financially or just a smile and letter to them,” Rowland said.

a dance to a compilation of Disney songs.

“The dance is so important because it brings so many

individuals together as a hype crew,” Velasquez said. “It

helps keep the energy up and get everyone excited to