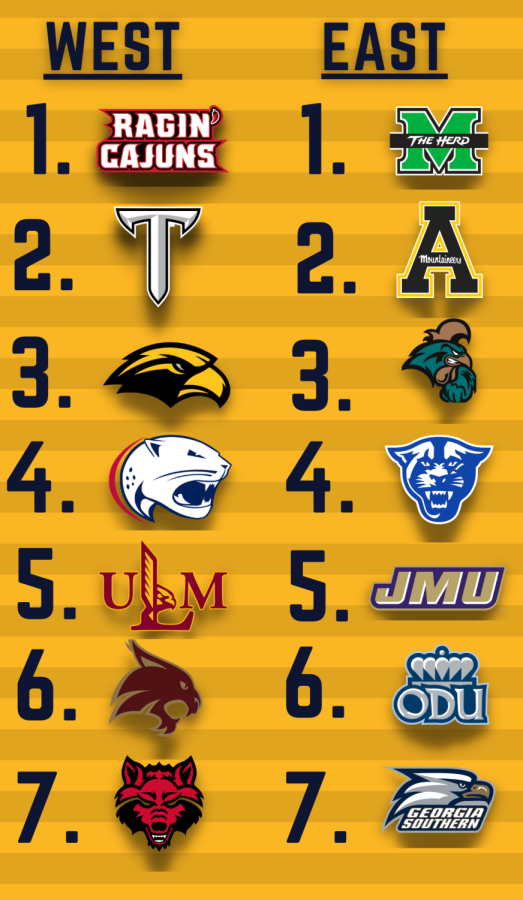 #1 Louisiana-Lafayette- Despite losing head coach Billy Napier in the offseason to Florida, the Ragin’ Cajuns are still favored to win their division because their schedule is ranked the second easiest in the Football Bowl Subdivision, according to football analyst Phil Steele. With the addition of losing quarterback Levi Lewis, the defending Sun Belt Conference champions are expected to decline in 2022.

#2. Troy- Under first year head coach Jon Sumrall, the Trojans plan to rebound from an up-and-down 5-7 campaign in 2021. With a move to the weakened West Division, Troy should expect an easier schedule in 2022. The Trojans are also returning 18 starters including quarterback Gunnar Watson, who started the last seven games in 2021.

#3. Southern Miss- With 10 transfers from the SEC and 16 returning starters, Southern Miss should expect stability in their first year in the SBC. The Golden Eagles will improve from their disappointing 3-9 2021 season under second year head coach Will Hall.

#4. South Alabama- The Jaguars hope to create their first non-losing season since 2013. The team came close in 2021 with a 5-7 record but lost four one-possession games. If second year head coach Kane Wommack can win more close games, he might see his team make a bowl this year.

#5. ULM- After a four win season under head coach Terry Bowden, ULM aims to reach a bowl for the first time since 2012. However, their schedule shows a tough road ahead, with away games at Texas, Army, and Alabama. Despite the schedule, with the return of eight offensive starters including quarterback Chandler Rogers, the Warhawks are a dark horse in the West Division

#6. Texas State- It’s a make-or-break year for fourth year head coach Jake Spavital, as he has a record of 9-27 in his first three seasons. The Bobcats return running back Calvin Hill, who rushed for 744 yards last season with 5.6 yards per carry.

#7. Arkansas State- Head coach Butch Jones looks to continue the rebuild after a disastrous 2021 season which saw them going 2-10. 2022 looks to be another rough season with games at Louisiana-Lafayette, Memphis and Ohio State.

#1. Marshall- The newcomer to the Sun Belt has great odds to run away with the conference in its first year. The Thundering Herd gets their most difficult match-ups at home. They will be tested with the elites of the SBC—Coastal, ULL and App State. Running back Rasheen Ali was first in Conference USA last season with 24 rushing touchdowns. If he can have a repeat performance in 2022, Marshall will fit right in the SBC.

#2. Appalachian State- The defending East Division champs have a mostly favorable schedule with a few challenging outings. The  Mountaineers host North Carolina and then  face Texas A&M who slayed Alabama last season. Then they take on Coastal and Marshall on the road. App State has two incredible running backs in Camerun Peoples and Nate Noel. The two backs had a total of over 2,000 yards rushing and 18 total touchdowns. It’ll be difficult to stop the most high-powered offense in the East.

#3. Coastal Carolina- The Chanticleers lost some high caliber players and have the fewest returning starters in the SBC, but an extremely dangerous Grayson McCall is still under center. The two-time SBC Player of the Year will have to channel his inner gunslinger with marquee match-ups against Marshall and an at home game against App State. An elite quarterback such as McCall makes them a dark horse in the conference.

#4. Georgia State- The Panthers enter 2022 as a solid team on paper but they might find themselves a victim of the draw on their schedule. They visit App State off a bye week and close the season at Marshall. They do have one of the premiere defenses in the SBC that collected a school record 38 sacks in 2021.

#5. James Madison- The Dukes have been a powerhouse in the football championship division. They draw an easy schedule but face off against Marshall and Coastal to give them a SBC welcome.

#7. Georgia Southern- A combination of a new coach, a scheme change and a difficult schedule makes it unlikely that the Eagles will be anything other than basement dwellers of the SBC looking to play spoiler.