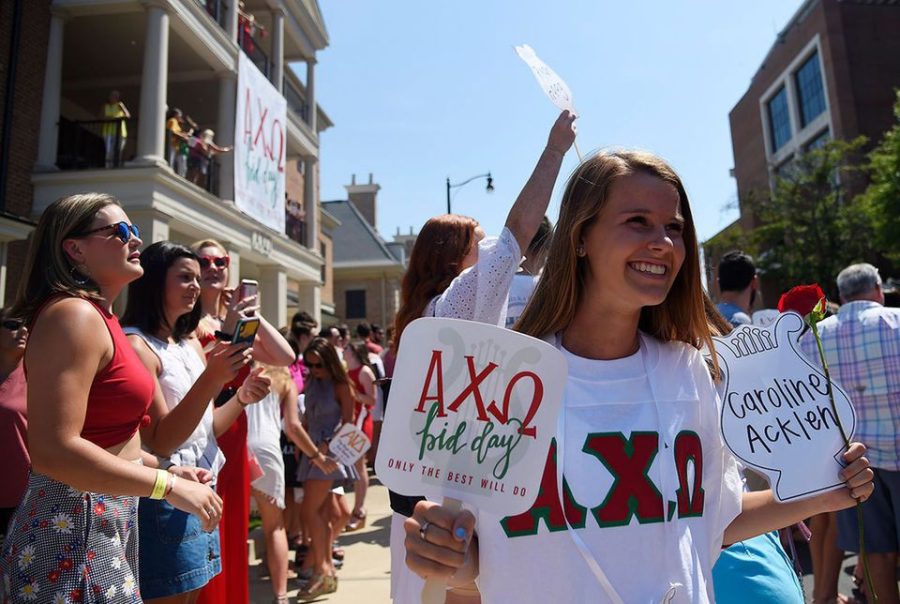 Of the 2,239 women who attended the first round of events for Fall 2019 formal recruitment at University of Alabama, 90 percent (2,007 women) received bids from the 17 Panhellenic sororities that participated during Bid Day.

Sororities, especially in the south, are based on tradition and often fall short in their efforts to change with the times. These outdated organizations need to be more focused on inclusivity.

Though these sororities might be open to anyone who identifies as a woman, they still have the unique say in who they choose to accept.

Oftentimes though, LGBTQ recruits might struggle to receive a bid.

One particular instance of this discrimination has been in the spotlight recently on TikTok.

A University of Alabama student, Grant Sikes, documented her

journey during what is known as Bama Rush.

On the platform, Sikes explained that her sex is male, and she has always been more similar to what traditionally society portrays

as a woman. She identifies as nonbinary.

When considering joining Greek Life, she knew fraternities were not where she would belong but that sororities were more catered to her wants.

Unfortunately, Sikes was rejected from all sororities at the university. From her videos, one can only assume she fits the mold of the classic sorority girl. Upon hearing the news of her dismissal, I was surprised and began to grow concerned.

For Fall 2021, 2,299 out of 2,501 women received a bid during recruitment, according to the Alabama Panhellenic Association. That is around a 92% chance of receiving a bid. With such good odds, the fact that Sikes did not receive a bid might be due to discrimination from the sororities.

Even if Sikes were to be

accepted into a sorority, more inclusivity issues might have arisen. For instance, sororities
are often expected to mingle with fraternities. Often, there are parties where it is mandatory to bring someone of the opposite gender

as a date. This might cause LGBTQ members to not feel as welcomed. Another issue that might arise for LGBTQ members is bullying. With

parties and drinking, sororities could be dangerous for members like Sikes if other members are not welcoming towards them.

There’s a fine line between discrimination and personalized selection. Efforts need to be
made by sororities to ensure their organizations are inclusive and welcoming to all types of women while still being able to personalize their choice of members.

Although these organizations might be outdated and have a lot to learn, like Sikes, if Greek life
is something that interests and appeals to you, then it is worth giving it a shot.