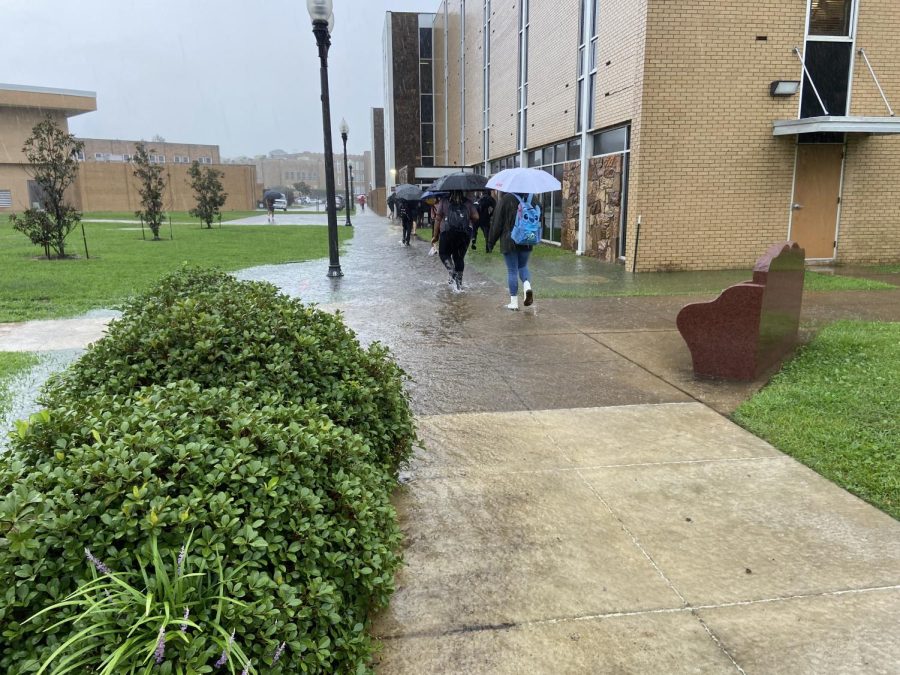 Northeast Louisiana received the drought killer that it desperately needed. Unfortunately, this weather system overstayed its welcome. From Aug. 21-28, over nine inches of rain fell in Monroe, and some nearby areas have claimed to have received over 10 inches.

So far, 17.76 inches of rain have fallen in the month of August—a new record for Monroe.The incessant downpours caused flash flooding in some areas and made the trek to class difficult for many students.

“My parents’ driveway completely flooded and I had to miss a day and a half of classes because I didn’t want to risk flooding my car’s engine,” Amir Alanjjar, a freshmen computer science major, said.

The sheer amount of rain last week means the threat of flooding is still there.

“Given the saturated ground, there is really nowhere for water to go until we can dry out some,” atmospheric science professor Todd Murphy, said. “So any thunderstorm we get over the next week with heavy rain will be a flash flood risk.”

Water levels on Bayou Desiard have risen sharply since the torrent of storms came through last week with the highest numbers reaching over 71 feet. The pause in rain over the weekend should help these levels, but with more rain in the forecast, students need to be wary of possible flood dangers.

And with the threat of flash flooding lingering in the near future, Murphy advises everyone to be aware of what to do in case of flooding.

“People need to remember to not drive through flooded roadways—turn around, don’t drown,” Murphy said. “All it takes is a couple of feet of water to carry away vehicles, including pickup trucks and SUVs. Also, we can do our part to decrease flood risk by clearing out debris near and around storm drains.”

Even with the amount of rain Northeast Louisiana received, the region dodged the brunt of this storm system.

Much of the southern region of the U.S. dealt with the same system that made its way through Monroe. In Dallas, the storm dumped over 10 inches in some areas in just a few hours. Dallas-Fort Worth received a total of 9.19 inches of rain in a 24-hour period—a new record. According to ABC News, Dallas County went under a state of disaster last Monday after a 60-year-old woman drowned in fast-moving floodwaters.

Central Mississippi faced some of the worst flooding in the system. Portions of I-20 were closed and the National Weather Service in Jackson put out rarely-issued flash flood emergencies around the state’s capital.         The NWS in Jackson stated flooding of this magnitude is anywhere from a 1-in-200 to a 1-in-500-year event. Mississippi Gov. Tate Reeves declared a state of emergency as the Pearl River in Jackson is set to flood.

“If predictions prove accurate, the Pearl River is expected to crest on Monday, August 29th, at 36 feet,” Reeves said.

Anything over 26 feet is considered a flood stage according to CNN. Parts of Jackson have the potential to flood at around 34 feet and water could potentially seep into homes as it approaches the expected 36 feet.

The flooding in these areas might have been made worse because of the drought conditions in the region.

With rain chances hanging around this week, these cities are not out of the woods just yet.