Warhawks storm brewing with a 2-0 start 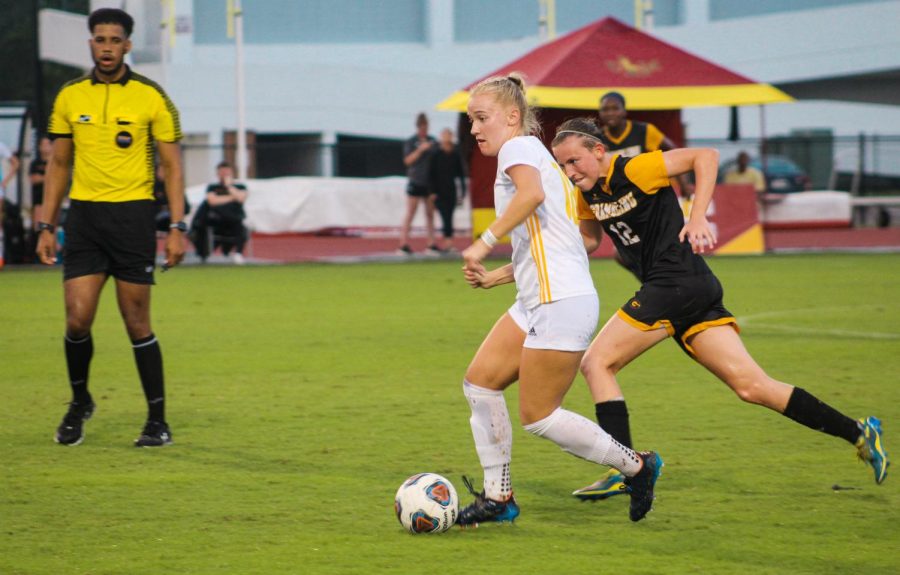 The Warhawks begin their season picking up right where they left off last year. After a long lightning delay and an even longer drive to the match, ULM pulled off an amazing season opener against Texas A&M Commerce that featured a hat trick by sophomore Inge Konst, the ninth hat trick in program history and the fourth under head coach Sean Fraser.

Friday’s fight featured heavy rain and high tensions as ULM hosted Grambling State University. The torrential downpour failed to stop the Warhawks as they were victorious with a score of 3-2.

While the sky was dark and gloomy, the Warhawks shined through in the first half, out shooting the Lady Tigers 7-2. However, neither team made it to the back of the net.

The pace increased drastically in the second half, with goals being scored at breakneck speeds by both teams. ULM once more out shot Grambling 9-3.

First blood was drawn five minutes into the second half, when freshman Ashley Washburn scored off an assist from graduate student Kédie Johnson. This marks Washburn’s first collegiate goal on record.

Four short minutes later, a rough foul by Grambling gave the Warhawks a deadly opportunity to stretch the lead to two, and a successful penalty kick by Lena Göppel turned that opportunity into a reality.

Like clockwork, four minutes pass again, but this time it’s the Lady Tigers who put a goal on the board, narrowing their deficit to only 2-1.

Without missing a beat, the Warhawks go back on the offensive, making every attempt to put a pause in the Lady Tigers’ momentum. Constant pressure near the Lady Tigers’ box had all in attendance on the edge of their feet.

Following the rhythm of the previous three scores, another four minutes pass and the Warhawks land their third goal of the match. Washburn, off an assist from Mara Grutkamp, found the back of the net for a second time, giving the Warhawks a comfortable lead of 3-1.

After this, both teams found themselves desperate for chances, each player waiting for their opponent to make a mistake. The field still soaked, the potential for error was certainly present.

Thirteen minutes had gone by, and a foul on ULM gave Grambling great position on the field. Shortly after, the Lady Tigers made their strike and closed the score gap to just 3-2. With fifteen minutes left to play and both teams determined to come out on top, the players and fans were electric.

Following constant exchanges of advantage, both teams were left with only five minutes of game to play. Washburn took a shot on goal, looking to secure ULM’s tenth hat trick, but the disciplined hands of Grambling’s goalie set that ambition on the backburner.

With solid defense wrapping up the game, the final countdown began and when all zeros were on the board, ULM came out on top with a score of 3-2. ULM now leads the series against GSU 10-3, with ULM being 7-0 at home.

The Warhawks will travel to Lorman, Mississippi on Tuesday to face Alcorn State University for the second year in a row. ULM leads 3-0 in the series.