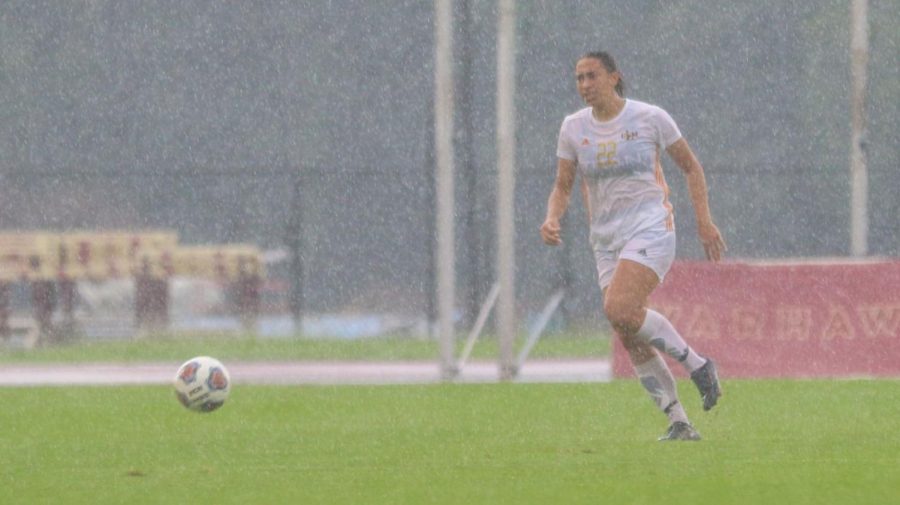 The Warhawks entered the weekend with a 6-0-1 record after a 1-0 edge at home versus Texas Southern.

In the 75th minute of play, a free kick from Lena Göppel set up for the only goal of the match. Junior defender Lucia Lobato played off Göppel’s assist and landed one in the right side of the net, pushing the Warhawks to a 1-0 lead.

“I knew Lena was going to deliver a peach of a ball, so I was ready to get on the end of it,” Lobato said.

Friday’s game versus the Lady Tigers experienced a delay due to a thunderstorm passing through the area. Even after the beginning of the match, a fair amount of rain continued to fall. Unphased, both teams pressed on. The desire to win permeated the air, and tensions were through the roof.

ULM dominated possession during the first half, forcing the Lady Tigers to place the ball out of bounds to disrupt the momentum of the Warhawks.

In the first half alone, the Warhawks had 18 shots, with eight targeted on goal.

Entering the second half, the pace of the game slowed down. While ULM dominated offensively in the first half, going into the second, both teams shared the ball rather equally. With only 45 minutes to play, both teams had to calculate every single move.

The first and only goal of the match was finally scored 75 minutes in with Lobato drawing first blood for the Warhawks.

From here, only 15 minutes remained to decide a winner. Duking it out for control of the match, both teams employed clean movement. When it got gown to only a few brief minutes until the end, the field was a home for intense scrambles to fight for the ball.

In the end, time expired and ULM earned their fourth consecutive win.

ULM totaled 40 shots, with 18 on the goal. A phenomenal defense completely shut down the Lady Tigers, not allowing them to put a single shot up. Lobato also discussed her thoughts at the end of the match.

“I thought that we all linked up well and dominated every aspect of the game […]we created loads of chances and thankfully one of them went in.” Lobato said. “We were also delighted with the clean sheet.”

The Warhawks will travel to Prairie View A&M for their non-conference finale on Thursday at 4 p.m.