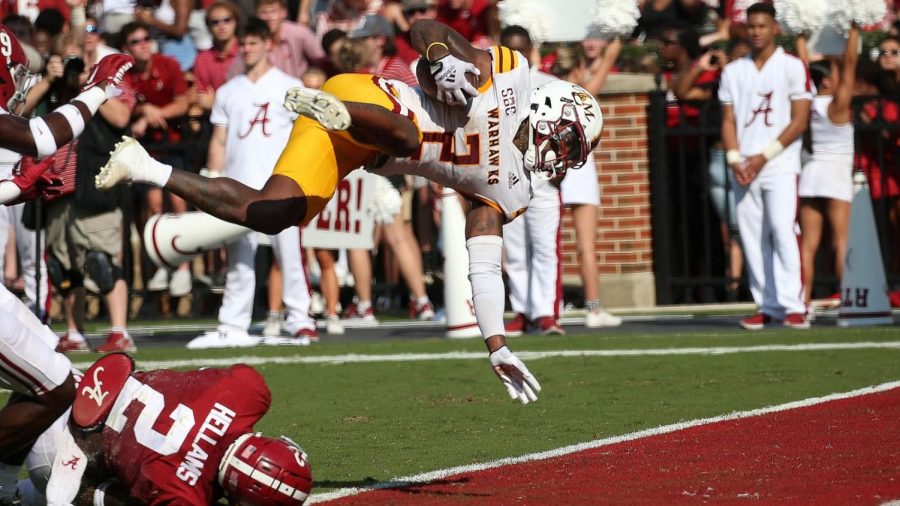 The second quarter in Saturday’s game against the Alabama Crimson Tide was one of the only bright spots of the game for the Warhawks as they fell in a 63-7 blowout loss.

Going in and competing against, let alone beating the No. 2 team in the country is no easy task, and head coach Terry Bowden knew this.

“They were better than us,” Bowden said. “The key is to get what you can out of a game like this.”

The first quarter for the Warhawks was about as bad as it could get. On Alabama’s first offensive drive, quarterback Bryce Young found Terashon Holden for a 33-yard touchdown pass to put the Crimson Tide up 7-0 in less than two minutes.

This marks the third interception of the year for Driggers, who continues to have an outstanding season.

After the turnover, linebacker Will Anderson Jr. intercepted quarterback Chandler Rogers for a pick-six. Alabama would continue to pour it on in the first quarter, and the Warhawks faced a 28-0 deficit.

The Warhawks responded to the early lead by putting on a strong second quarter performance.

This was highlighted by an eight play, 57 yards drive capped off by a 12-yard rush by running back Malik Jackson.

“That drive is who we are as ULM football” Rogers said. “That drive really sparked us, it’s something that we really needed.”

In the second quarter, ULM outgained Alabama 110 yards to 97 yards and held them scoreless until a one-minute drill drive by Bryce Young put the Tide to 35 points.

The Crimson Tide wasted no time in the second half as they responded with a third quarter which saw them outscore ULM 14-0. They also outgained the Warhawks 160 yards to 41.

The fourth quarter was much of the same as a tired out Warhawks squad failed to compete and ended up with the 56-point blowout loss.

The main lowlight for ULM was the special teams play. The Warhawk defense constantly found themselves playing with a short field. Alabama set the school record for most punt return yards in a single game with 262 yards off eight punt returns.

The only stat ULM beat the Tide in was turnovers. ULM forced two turnovers with two interceptions off Young while only allowing one turnover.

Despite the loss, Bowden expressed no concern for his program and its goal in contending for a conference championship.

“That’s the Sun Belt, not the Southeastern Conference. We’re getting back into our conference now.”

The road to compete for the SBC championship starts next week when the Warhawks host in-state rival Louisiana-Lafayette.