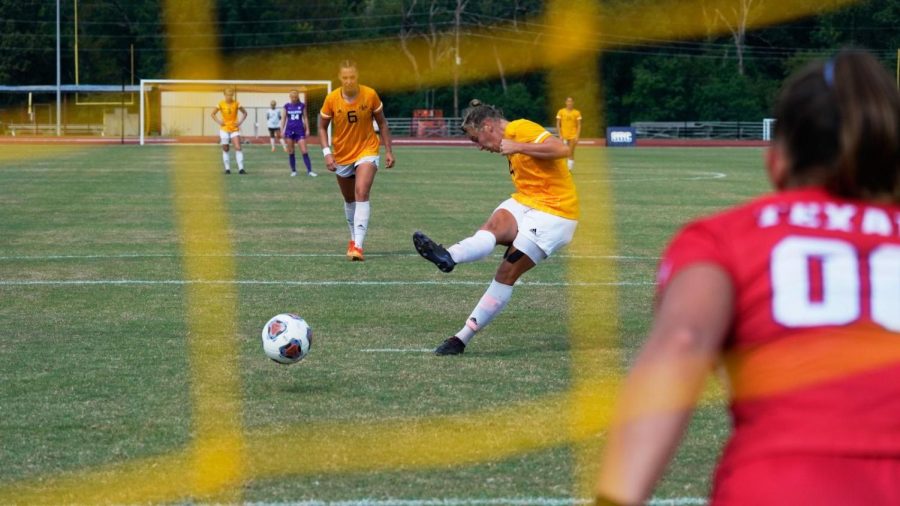 The ULM women’s soccer team finished the non-conference portion of their 2022 schedule with a 5-1 win over Prairie View A&M. This win marked the sixth consecutive victory after a tie to Alcorn State, and it pushes the Warhawks to a streak of nine games undefeated.

Wasting no time, Taylor Henry got things started with a clean goal in the 10th minute, thanks to an assist from Mara Grutkamp.

In the 34th minute, the Lady Panthers finally got on the board with a shot of their own, but the 1-1 tie was short-lived.

From assisting shots to finding the back of the net on her own, Grutkamp scored, returning the Warhawks back on top. Here, ULM built their nest in the lead and only stretched their margin of victory.

ULM leads the entire nation in shots on goal with 109 while also being second in shots on goal per game with 12.11. These scoring opportunities aren’t without reward, as plenty of these shots have blazed by opponent goalies into the net.

Feeding the flames, Santana Pressley managed to sneak one by the Lady Panthers and delivered a massive blow to the little defense on the prairie, boosting the Warhawks to a 3-1 lead.

In the 58th minute, the Warhawks were given their most lethal weapon: a penalty kick. Sophomore Inge Konst landed a laser of a penalty kick to extend the lead to 4-1. Konst is 3 for 3 in penalty kicks this season and sits atop the NCAA with only two other athletes in the category.

Ashley Washburn capitalized off an assist from Peyton Pipes in the 78th minute to secure her fifth career goal and ULM’s fifth and final point of the match.

Thursday’s game proved that finding the net is a team effort, with all five goals being made by a unique player.

The utility of each and every player shows, as the Warhawks are tied for fourth in the nation in goals scored with 27 so far. The current roster includes Courtney Marten, the current single-season goals record holder, and Janet Stopka, the previous record holder. It’s safe to say that with an offense this stacked, the number of goals scored isn’t likely to plateau any time soon.

All of these statistics serve as concrete evidence why the ULM women’s soccer team can comfortably sit at number four in the nation in won-lost-tied percentage. Their current 8-0-1 record gives them a respectable .944 percentage before entering conference play.